If you’re thinking about walking up Ben Nevis this could be the most important post that you will ever read!

At 1,344 m, Ben Nevis is the highest mountain in Scotland and the UK. As such it is a very popular mountain for people to climb. It is often attempted by inexperienced hikers who have no idea of the scale of the task or of the potential dangers involved. Many people attempt the summit of Ben Nevis without taking proper outdoor gear.

If you are planning to walk up to the top of Ben Nevis the first thing you need to know is the escape route from the summit. Regardless of the weather in the valley or on the mountain tops when you start your hike, by the time you reach the summit the weather may have closed in, resulting in near zero visibility. This has happened to me.

There are two dangerous gullies which must be avoided. Falling down them is likely to result in fatal injuries. They are Gardyloo Gully and Five Finger Gully. To avoid these gullies, from the summit trig point follow a bearing of 233 degrees for 150 metres (roughly 100 double steps), and then a bearing of 284 degrees. These are magnetic bearings that should be followed directly from your compass alone.

What is the Best Route up Ben Nevis?

The route that most people take up Ben Nevis starts in the valley of Glen Nevis, near the campsite. The footpath is well maintained. It runs along the side of Meall an t-Stuidhe, up towards the Lochan. At 640 m there is a T-junction where you turn right and head south across Red Burn, before the path zig-zags up a boulder field on the side of Ben Nevis. The final approach to the summit is a more or less a straight run up a gently undulating plateau. The route back down is simply the reverse. This tourist route is known as the Pony Track or the Motorway, due to the number of walkers on it! As a rough guide it takes about 9 hours to walk up and back down the mountain. 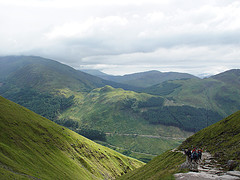 The walk up the from Glen Nevis valley to Lochan Meall an t-Stuidhe is green and pleasant. Once you get further up and into the boulder field the terrain becomes mountainous and rugged. The lower gradient of the plateau is welcome after the rocky ascent, but there are several false summits which can be frustrating when you are exhausted! If you make it to the summit and are lucky enough to be under the cloud base, the views are stunning. You can see right across the Scottish Highlands: mountains from horizon to horizon. Spectacular!

There are also scrambling, mountaineering and climbing routes to the summit, such as Carn Mor Dearg Arete.

It is shocking to see what some people wear on Ben Nevis. On the two occasions that I have hiked up to the summit there were lots of people wearing jeans, t-shirt and trainers. Whilst the valley was lovely and warm with late April sunshine, the summit was cold. There was a thick covering of snow over the top 200 m of the summit. The visibility from the summit was clear the first time that I there, but the second time it started to snow and there was a white out. Visibility was down to a couple metres. This experience demonstrates the importance of being prepared for all weather conditions when hiking up Ben Nevis, or indeed any other mountain, such as Scafell Pike in the Lake District.

It is quite a list, but all this outdoor gear should ensure that you keep comfortable, warm, dry and blister free. Hopefully you will not need any of the survival kit, but its always best to take it.

Is it necessary to take crampons and an ice axe? In winter conditions, yes it is, and it is also necessary to know how to make a self arrest using an ice axe. The YouTube video below, from the Mountaineering Council of Scotland, shows various techniques and is well worth watching.

In late April / early May when I walked up the summit was covered in snow. Providing you keep well away from the edge, the plateau is relatively flat and walking in the snow is easy enough without crampons. There were a few places further down the path which were covered in icy snow patches, several metres in length. At the time I did not have crampons and they would have been useful for these short sections.

It is important to be aware of cornices, where the snow overhangs the edge of mountain cliffs. These can give way under your weight, leading you to fall to your death. As mentioned above, keep well away from the edge when there is snow!

The type of gear that you need to take for camping on Ben Nevis depends upon the time of year that you are going and how high up you intend to camp.

In winter conditions you will need a 4 season mountain tent capable of withstanding snowfall and high winds. A sleeping bag suitable for winter alpinism will be necessary since the temperature can get down to below -10°C.

Even during the summer the temperature can go below freezing and there can be high winds, especially at the summit. A 3 to 4 season tent should provide adequate protection and sleeping bag suitable for 3 summer aplinism will be warm enough.

About half way up, near Lochan Meall an t-Stuidhe, the ground is quite flat which makes it a good place to camp. The summit of Ben Nevis is also flat and suitable for camping.

During the summer months, Scotland is famous for its midges. Fear not, there are plenty of ways to avoid getting midge bites.

And don’t forget to take with you a Model T Ford car, a bed, a wheel barrow, a piano and barrel of beer. All these items have been taken up the top of Ben Nevis for either publicity stunts or just for a laugh. What bizarre item(s) would you take up a mountain? Let us know, click on “comments” below!

View all posts by cheaptentsblog

16 thoughts on “What Outdoor Gear Do You Need to Take Up Ben Nevis?”

This site uses Akismet to reduce spam. Learn how your comment data is processed.