Design a site like this with WordPress.com
Get started
Skip to content
cheaptentsblog Tests & Reviews 25th Apr 2012 6 Minutes

Let’s start this review of the Force 10 Helium 100 with a bit of background information. In 2012 Vango have changed round their backpacking range, dropping the old Helium Superlite 100 and replacing it with the redesigned the Helium 100. Its probably not a surprising move as the Helium Superlite 100 at 0.97kg was extremely close in weight to the old Helium 100, which weighed 1.15kg, not to mention that they were only separated in RRPs by only £30. The current model is called the Force 10 Helium 1. 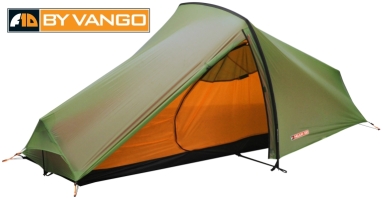 Bigger Inside with Smaller Pitch Size

Visually as you would imagine the 2012 edition Force 10 Helium 100 looks similar to its predecessor. However, a closer examination will reveal that it has a subtly different shape which means that although the pitched size is not as big, the internal area of the tent is much bigger.

This increase in space is partly due to a number of factors, the first being that the arch which supports the tent has been moved to a central position, rather than being towards one end as in the previous version, this increases the steepness of the sides, it is also helped by the fact that at it’s highest point the Helium 100 2012 edition is 10cm’s taller than its predecessor. Vango have also introduced small poles (which Jack Wolfskin calls Corner Edge Poles) which are fitted at either end of the tent increasing the height at the foot and the head allowing a better use of the space available and smaller pitching.

I have read reviews of the old Helium 100 where the reviewer wrote that the tent is a struggle for people over 6ft to use. I myself am around 6ft 2″ and found there to be considerably more room than I expected in the new Helium 100 and another one of my colleagues who is 6ft 4″ tried the tent out and was more than happy with the room he had in the 6ft 8″ long inner tent. Perhaps Vango should have renamed this tent the Helium Tardis!

As already mentioned I like the size of the Helium 100 there is plenty of room for me to stretch out or sit up and with the extra 10cm’s of height the tent feels really spacious, perhaps comparing it to space in a Cathedral is going too far but I am sure you get my drift! The Helium 100 also has a decent sized porch area where you can quite easily cook or store a rucksack.

There are a number of little touches on the Helium 100 that may not make you buy the tent, but when you find them and use them, you sit back and think that’s a good idea! I certainly did! Perhaps the smallest of these which really stood out for me is the locking clips at either end of the tent on the small guy-lines. I am hopeless at tying tight knots, these simple pieces of plastic on the ends of guy-lines just made pitching that little bit easier, now for me it may have saved 30 seconds or a minute in total, but imagine you relief after hard days trek with your hands cold, the wind howling and rain on the horizon that you don’t have to tie a lot of complicated knots!

The Helium 100 like many tents comes with a repair kit in a little pouch, Vango must be applauded as they have but good sized squares of all the fabric used in the tent, with the tent outer fabric being sticky backed for urgent repairs in the field. There is also a section of pole to allow repairs to the poles. Thankfully, many people never have the need to use these handy repair kits but I think they are great as they provide some piece of mind.

Writing about the repair kit leads me on to another point which has no direct link to tent usage but is a neat touch and one I appreciate. The poles for the Helium 100 are stored in their own separate bags, as is the repair kit, and when you have folded the tent to place it in the stuff sack two handy fabric ties allow you to tie the tent together so it keeps its shape when putting it back into the stuff sack. You may scoff and think these are presentation gimmicks, to me they really nice touches, allowing me to neatly and easily put the tent away and also keep the edges of the poles away from the tent fabrics.

As with many lightweight tents there has to be a trade off between weight and durability, on the Helium 100, Vango have approached this problem in a practical common sense way and have reinforced the points placed under tension when staking the tent out. On the other side of this equation though, I thought the mesh used on the tent inner felt a little delicate.

The most notable and biggest criticism of the old Helium 100 was its lack of internal size, Vango have responded to this in the Helium 100 and have cleverly increased the internal size considerably whilst reducing the space needed for pitching.

Is Condensation an issue?

Condensation can be an issue when buying tents especially ultralight ones and the old Helium 100 was criticised for this by users. Vango have addressed this in the new Helium 100 in a number of ways including having some mesh in the inner door, having vents at either end of the tent in the outer and the fly and the additional 10cm’s of height helps too. Furthermore, there is a clip which allows you to have the door closed but without using the zip this allows more air into the tent and can be used as both a vent or a passage to allow a breeze in. Condensation wasn’t an issue for me although it must be said I managed to get my hands on the Helium 100 during the few days good weather we had this April. I would be interested to know people’s opinions of how it handles in colder weather although from what I have read so far it seems to handle the cold well.

TBS or no TBS?

Many Vango tents have the TBS Pro Tension Band System and the Helium 100 is no different. There is much acclaim for the system, as it uses simple technology and geometry to provide support and tension to the poles in windy conditions. But in the Helium 100 I found myself questioning not the system but how it is deployed in this tent.

The Helium 100 is a tunnel built on a single arch and the TBS system has to support this arch, the door on the Helium 100 has to be at the highest point and because of this creates a potential problem for larger (in terms of width) or less mobile users. The problem I allude to is the TBS system goes through the door, and in order to open the door fully you have to disconnect the TBS. This may not be an issue for many people, as they may not want the door fully open or only use the TBS in windy conditions, on a personal level I found it a little bizarre to be in the tent looking at TBS cord leaving the tent in the middle of a closed door!

No matter how I think about it, I can’t think of a better way to implement the system, and as this configuration was used in the old and very successful Helium 100, who I am to quibble?

I think the 2012 edition of the Helium 100 is an extremely good tent, especially when you consider its price (RRP of £250 as of April 2012), weight and functionality.

There are as with any tent niggles, but these which I have mentioned previously they are far outweighed by the positive features and points of the Helium 100. The most notable and biggest criticism of the old Helium 100 was its lack of internal size, Vango have responded to this in the Helium 100 and have cleverly increased the internal size considerably whilst reducing the space needed for pitching. This is a really good sign for Vango and in my opinion shows a manufacturer prepared to listen to users and evolve their designs.

Would I buy a Helium 100? If I wanted a lightweight tent, that was robust, easy to pitch and was on a budget, then yes I would!

View all posts by cheaptentsblog

This site uses Akismet to reduce spam. Learn how your comment data is processed.